Following the Philippines’ inclusion to the FIBA Olympic Qualifying Tournament in Belgrade, Serbia, San Miguel’s Chris Ross offered a suggestion for its preparation.

The Beermen guard tweeted on his Twitter account, @cmross6, Friday about such possibility of having Gilas Pilipinas compete as a guest team in the PBA.

The 2-time Defensive Player of the Year mentioned the PBA clubs then get an import each for better competition. 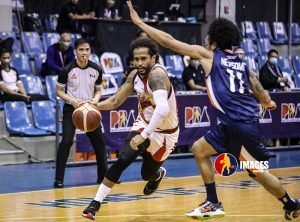 The OQT tips off on June 29, with Gilas grouped alongside Serbia and Dominican Republic.

In the other group are Senegal, Puerto Rico, and Italy.

The idea of Gilas joining the PBA has already been touched by league officials.

The national team last joined the PBA as a guest team back in the 2011 Commissioner’s Cup where the likes of Marcus Douthit, Chris Tiu, JVee Casio, Mark Barroca, Marcio Lassiter, and Chris Lutz made the semi-finals.