Up two to one in the finals of the five-team Third Conference (Invitational) against Great Taste Coffee Makers, the tradition-steeped Crispa Redmanizers were poised to romp away with their 14th title in Philippine Basketball Association (PBA) history.

Thanks to the Las Vegas-born Collins, the Coffee Makers jumped to a 56-40 lead late in the second quarter and never trailed thereafter. With 4:54 remaining in the game clock, Great Taste was miles ahead at 108-80.

It was just too humiliating for Valeriano (Danny) Floro to complete the impending downfall and meltdown (from a 2-1 series advantage) so much so that the genial Crispa team owner-manager, for the first time in his 25-year career, emptied his seat with still three minutes to go and walked over to the Great Taste bench to wave the white flag.

And who was there to greet Floro but his old friend and former club coach Virgilio (Baby) Dalupan, who was about to snare his second consecutive conference crown with Great Taste.

(Just a refresher: The second conference of the year was dubbed All-Filipino 2. The PBA, due to the emerging economic crisis in the country brought about by capital flight following the assassination of opposition leader Benigno (Nonoy) Aquino Jr. on August 21, 1983, had decided to hold a pair of All-Filipino conferences in a cost-saving move).

The traditional post-game handshake between the two was emotional and surreal. Their smiling faces camouflaged the dry tears, igniting the “what-if, the-way-we-were” narratives. Or they could have belted out the England Dan and John Ford Coley song “It’s sad to belong to someone else.”

While Dalupan and Floro severed their basketball partnership amicably after the 1982 PBA season, not a few hoop fans with fertile minds described the victory by Dalupan’s Great Taste over Floro’s Crispa as “adding insult to injury” if not “rubbing salt on a wound.”

Baby had been with Danny and Crispa since the mid-sixties and the former piloted the club to several championships in the old Manila Industrial and Commercial Athletic Association (MICAA) and later in the PBA.

In 1970, Crispa-Floro captured the all-comers National Open (Senior) championship and the imports-flavored MICAA Open crown to commence its march to commercial basketball greatness.

Dalupan and Crispa dominated the PBA in its first decade (1975-84), with the former earning ninth conference titles, including the Redmanizers’ first of two single-season, three-conference title sweep in 1976.

But Crispa’s last championship under Dalupan came in 1981. The following year was a disappointment as Toyota won a pair of titles under coach Ed Ocampo, San Miguel Beer and Crispa reached a conference final (2nd conference Invitational that was annexed by San Miguel Beer under Tommy Manotoc) just once and failed to deliver.

That led to the “retirement” of Dalupan at the end of year 1982. Coming aboard to replace him on the Crispa bench was Manotoc, who himself steered Crispa to a second Grand Slam in 1983.

But the itch to return to X-ing and O-ing was too much for Dalupan and The Maestro took over the Great Taste reins from two-time Olympian Jaime (Jimmy) Mariano midway through the 1984 season and eventually won five diadems with the Gokongwei franchise. Dalupan would later snare another ring with the Purefoods club for a total of 15 titles. 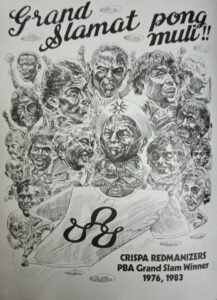 Crispa, on the other hand, got off to a great start in its farewell season in 1984. Narciso Bernardo, also a two-time Olympian, took over from Manotoc, who that year bowed out temporarily only to resume coaching activities with Universal Textile and San Miguel Beer later.

Crispa secured its 13th and last PBA conference crown when Bernardo essayed the Redmanizers’ conquest of Gilbey’s Gin in the finals of the first of two consecutive All-Filipino festivities.

Unfortunately, Crispa failed to land in the Final Four of the second All-Filipino competitions and then there was its debacle in the Third Conference.

Significantly, the journey ended a year after its arch-nemesis, Toyota, raised its curtain for a final time.