Gilas Pilipinas will have its sixth man inside the Smart-Araneta Coliseum for the 2023 FIBA World Cup Asian Qualifiers February 2022 window next week.

As Metro Manila is currently only under Alert Level 2, fans will be able to watch four Gilas games slated from February 24 to 28 inside the Big Dome. 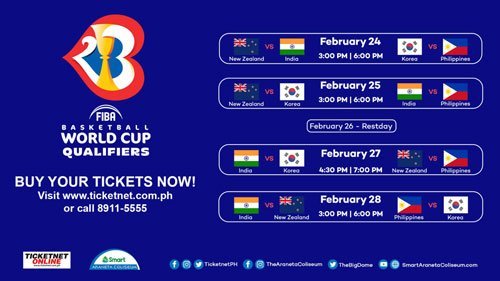 Only fully vaccinated individuals will be allowed (12 yrs. old & above);

Use of face mask inside the arena is required; and

No food allowed at audience area, only at concourse of the coliseum.

The Philippines will face South Korea twice on February 24 and 28. They will also battle India on the 25th and New Zealand on the 27th.

Already qualified for the World Cup being one of three host countries, Chot Reyes’s squad will only look to be competitive as the qualifiers progress.