Crying and overcome with emotion as she — along with the entire Philippines — heard their national anthem, Lupang Hinirang blast inside the Tokyo International Forum for the first time in an Olympic medal ceremony, Hidilyn Diaz made sure her likely Olympic swan song was historic. 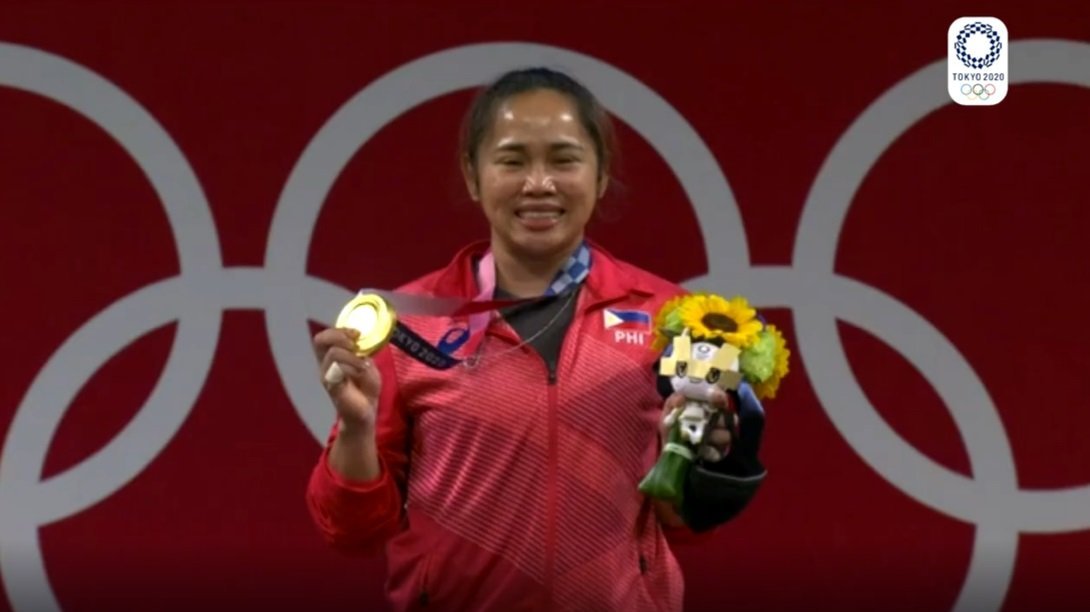 The 30-year-old four-time Olympic veteran’s triumph gave the Philippines its first-ever gold in 97 years, a remarkable record not seen prior to Monday night since the country started participating in the prestigious international sporting event in 1924.

In the competition, Diaz broke her personal-best record of 214 kilograms, lifting 97 in snatch and setting an Olympic-record 127 kilos in clean and jerk to rule the competition with a total of 224 kilos.

Her 97 kilos in snatch was also only a kilo short of the Olympic record of 98 set by Uzbekistan’s Muattar Nabieva. Diaz attempted a 99 for her final try in snatch, but was unable to pull it off.

The Philippine flag is going on top, the Lupang Hinirang will be played in the #Olympics for the very first time.#Weightlifting  #Tokyo2020  @OneSportsPHL @CignalTV pic.twitter.com/OzUHveJyUX

During the 2019 World Championships in Thailand, Diaz recorded 121 kilograms in clean and jerk, and 214 kilograms total.

Chinese counterpart Liao Qiuyun, the world record holder with 227 kilograms, previously beat Diaz in the 2019 World Championships, lifting 129 kilograms in clean and jerk compared to only 121 for Diaz.

Liao settled for the silver medal with 223. Diaz and Liao battled back and forth towards the end of the competition, adding to their declared weights trying to outlast each other.

In the end, Diaz’s record-breaking 127-kilo lift gave her the historic weightlifting championship. Zulfiya Chinshanlo of Kazakhstan bagged the bronze with 213.

Prior to her Tokyo accomplishment, Diaz was a gold medalist in the 2019 Southeast Asian Games in the Philippines and the 2018 Asian Games.

Diaz hurdled obstacles from the moment she sought a gold medal in her Olympic return, including thoughts of quitting and being included in a dubious government “matrix” which tagged Diaz has having links to groups planning an ouster of current president Rodrigo Roa Duterte.

In a much-publicized then Instagram story, Diaz also inquired out loud about the possibility of seeking private sector support for her journey to continue, as she admitted being on the verge of giving up her career.

Diaz spent most of her preparation for Tokyo in Malaysia, being away from her family for 16 months amidst a global health crisis.

If ever she decides Tokyo is her last stint at the Olympic stage, the monumental achievement is a fitting end to Diaz’s Olympic career, which started in 2008 in Beijing.

After four appearances in the Olympiad, Diaz is now a one-time gold medalist and one-time silver medalist, capping a sensational weightlifting career that is not over yet.