Chery Auto Philippines unveiled its star-studded Chery Tiggo Crossover squad for the Premier Volleyball League, which kicks off on May 2021.

The roster features some of the most prominent names in Philippine volleyball over the past decade, led by the Santiago sisters, Dindin (Manabat) and Jaja, as well as the Laure siblings, EJ and Eya. 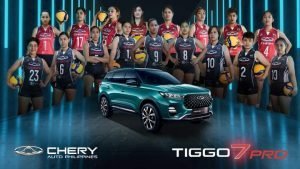 It will be Jaja’s return to home soil after playing overseas in the Japan V.League for Ageo Medics, which finished 5th in its recently-concluded campaign.

University of the Philippines Lady Maroons stars Marian Buitre and Justine Dorog are also part of the line-up.

Following the transfers of Chery Tiggo and Sta. Lucia, a total of 12 teams have already confirmed for the PVL in its open conference slated to begin May 11th.