BRAVE Combat Federation, the fastest-growing mixed martial arts promotion in the world, has just announced that Rahmatullah Yousufzai of Afghanistan has withdrawn from his three-round flyweight contest against Jenel “The Demolition Man” Lausa of the Philippines at BRAVE CF 47: ASIAN DOMINATION. The highly-anticipated event is set for Thursday, March 11 in Bahrain. 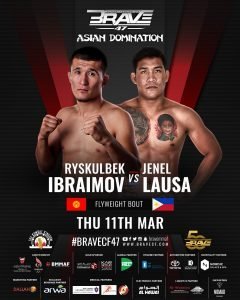 Taking Yousufzai’s place in the bout is Ryskulbek Ibraimov. He was originally scheduled to face Kazakhstan’s Asu Almabaev on the same card. The 29-year-old dynamo is one of the top flyweights to emerge from Kyrgyzstan. Possessing an 18-8 slate with six submissions and three knockouts, he has steamrolled through the competition in his home country. The well-rounded Aikol Manas representative will face a tough challenge as he takes on Lausa.

Born and raised in Iloilo, Philippines, Lausa holds a professional record of 7-5 with two knockout wins and two by way of submission. He has a wealth of fight experience under various organizations on his resumé. He has shared the cage with some of the best mixed martial artists in Asia, including Ernesto Montilla Jr., Crisanto Pitpitunge, Yao Zhikui and Ulka Sasaki.

BRAVE CF 47: ASIAN DOMINATION is headlined by a Lightweight World Title eliminator between Filipino superstar Rolando Dy and Kyrgyzstan’s Abdisalam Kubanychbek. The event will be broadcasted live and for free on BRAVE CF TV.